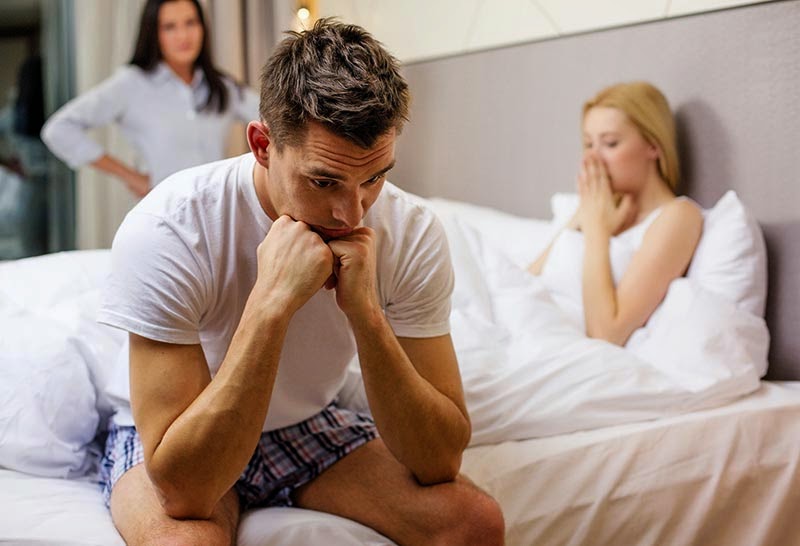 I hope you don’t mind, this one’s pretty complicated. My wife and I have been together for seven years. But throughout the seven years our sex life has never been great. I’ve always wanted more but she’s never wanted it as much as I have. I’ve been pretty respectful of that and haven’t really pushed it.

Recently, though, I found out that she’s been having an affair for the last 8 months. At first I wasn’t too upset because when she came clean, she told me it was just chatting and going to lunch, etc. I was pretty hurt but since it wasn’t sexual I didn’t flip out about it. I assumed that a lot of people get into flirtatious relationships but they shut it down before it gets sexual.

My mind is spinning. I still want to fix our relationship but will our sex life ever get better or will I always think about her doing those things with the other guy that she won’t try with me? I’d like to have more sex but is it unrealistic to expect our relationship to become more sexual after the affair?

Sorry to hear that your sex life hasn’t been great and that things have really taken a turn for the worst after this affair. I can only imagine how difficult this must be for you as a man. You’ve been wanting a better sexual relationship with your wife and someone else is getting to have what you should be having.

The good news is you want to fix your relationship, and I am assuming your wife does as well, because you haven’t stated otherwise. If you are both invested in improving the dynamic inside and outside the bedroom, there is hope. I believe this will be too hard to tackle on your own and that one or ideally both of you will go to therapy.

If I was your therapist, I would be curious as to why your wife will do these things with another man and not with you. I am willing to bet her reason may have more to do with her own issues and views around sex and marriage than it does about anything with you. For instance, maybe she thinks something like watching porn is “dirty” and has no place in a relationship between husband and wife. She may have a desire to do things sexually with someone she is not married to because of limited views on marriage and sexuality. If you understood and believed this to be true, perhaps you would not take this all as personally, because she would do the same with any guy she was married to. Understanding such and not letting it affect your sex life is easier said than done. I think the two of you really need to have a heart to heart and try to get to the bottom of what is going on with both of you. If you both feel you can tackle these issues yourselves and move forward, great. If not, definitely consider marriage and/or sex therapy. Good luck!

This is a tough one. But if it’s any consolation, your experience is not unique by any means. A lot of couples who come to see me after an affair have a hard time in the bedroom afterwards. But the ones who are willing to do the work are able to repair their relationship AND the bedroom. So yes, it IS realistic to expect your relationship to become more sexual after an affair.

I won’t lie, this is hard work. There can be hundreds of reasons for a vulnerability in you relationship which lead to an affair. It can range anywhere from limited views of sex within marriage (as Rachel said) to past relationship trauma to something seemingly unrelated from the past. Because there can be so many different things, I strongly suggest you two go see a counselor. They can help you get to the bottom of things, sort things out and create a healthier, more passionate relationship than ever before.

About Rachel:  Rachel Russo is a Dating, Relationship, and Image Coach who works with marriage-minded singles and couples in NYC and throughout the US. Checkout her website at RachelRusso.com
About Aaron: Aaron Anderson is a Licensed Marriage and Family Therapist, Director of The Marriage and Family Clinic in Denver, Colorado and writer for various websites on marriage and relationships.

← Family Resolutions to Make This Your Best Year
New Year, New You: Tips for Sticking to Your New Year’s Resolution →

2 Responses to He Said/She Said: Sex After an Affair